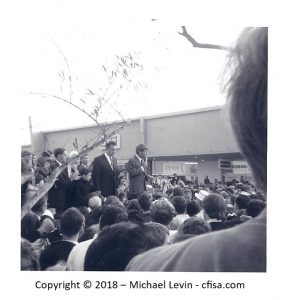 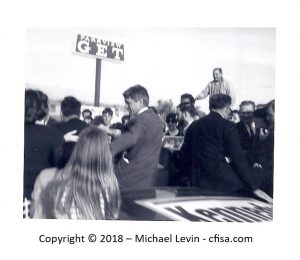 Today marks the 50th anniversary of the assassination of Bobby Kennedy. I am finding it an opportune time to reflect upon my personal memories of history and how it shaped my future. We often do not realize that current events can have a huge impact on our future and our children’s future.

On June 3th, 1968, I was 12 years old and in the sixth-grade in San Francisco.  I saw on the news that Bobby Kennedy would be speaking at a rally just two blocks from my house. I decided to ride my blue Stingray bike over to the shopping center and see what was going on.

At 12 years old, I am sure that politics was not something that I cared about but I became caught up in the enthusiasm and excitement of the crowd.  I brought my Kodak Instamatic camera and decided to take some pictures if I got the chance.  I ended up climbing a tree that was in the middle of the parking lot where the speech was happening.

As I listened to the speech, I remember thinking what he was saying made sense to me. His ideas and plans for our country seemed good. I’m sure he talked about civil rights, ending poverty, more jobs and the standard political fare.

But whatever he said resonated with me and at the end of the speech I liked Bobby Kennedy and had decided he was my guy!

In that short speech, the seeds for my interest in political science were planted that would propel me into my future of public service and law enforcement.

The next day, June 4th, 1968, was the California presidential primary election. For the first time in my life I was interested in politics and the outcome of an election. I remember watching the election results as they came in after the polls closed.

I watched an old nine inch black and white portable TV in my bedroom. The channel change knob was broken, and I had to use a pair of pliers to change the channel back and forth. I did this throughout the night and became mesmerized by the election results as they unfolded. I stayed up way past my normal school night bedtime and was determined to not go to sleep till the final results were in and Bobby gave his speech.

Just after midnight, on June 5th, 1968, I watched in my room as Bobby Kennedy gave his victory speech at the Ambassador Hotel in Los Angeles. I felt happy that he had won and would most likely become our next president.

I continued to watch the TV after the speech and was in total shock as the news came on the TV that Bobby Kennedy had been shot. How could this happen? Where were the police and why was he not protected from the same tragic death as his brother, John Kennedy? Didn’t someone see this coming?

I stayed up almost the entire night watching the news until I could not keep my eyes open any longer. I ended up going to school the next day barely able to function due to my lack of sleep. I remember playing dodge ball that day in the school playground not caring about the game and thinking only about the tragedy that I had witnessed.

This tragic event was the first time that a political event really affected me. I can now see the significance of this event as it helped to shape the direction in the career path I took.

While in college, I decided that public service and law enforcement was the career path I wanted to pursue. I ended up majoring in administration of justice and political science at San Jose State University.

In 1978, at the age of just twenty-one I became a police officer in Mountain View California.  I worked as a patrol officer for a few years then as a detective and a member of the SWAT team.

In an interesting twist of fate, in 1988 almost twenty years after the assassination of Bobby Kennedy I interviewed Sirhan Sirhan in Soledad prison in California. I was part of a team of two agents that conducted a protective intelligence interview of Sirhan Sirhan. We ended up interviewing him for several hours. I found the experience surreal and the interview was an amazing opportunity to learn his motivations and thoughts twenty years later.

In my career with the Secret Service I had the honor of protecting Presidents and Heads of State. I worked protection in the White House during the Clinton/Gore administration.

I also served as the Branch Chief of the U.S. Secret Service Electronic Crimes Task Force program in Washington DC, supervising 17 task forces across the country. I ended up working in the arena of computer forensics and cyber-crime investigations for over twenty years. I also worked at the CIA and NSA as the Secret Service Intelligence Liaison Officer.

I retired from the U.S. Department of Homeland Security as the Deputy Director of the National Cyber Security Division in Washington DC after over thirty years in law enforcement and public service.

I don’t want to make this blog article political but wanted to conclude with some final thoughts. I have never registered as a republican or democrat and truly consider myself an “independent” thinker when it comes to politics.  I did this when I was a Secret Service agent to insure I maintained the appearance of impartiality and independence from any party affiliation. I also did this because I find it always best to think for myself and would never follow a party line that I truly disagree with.

Now that I can objectively look back at my career I can honestly say that this tragic event played a profound impact in my life.

We can only hope that our next generation will use our current tragic events and political discord to make a change for the better in the future.

About the Center for Information Security Awareness – CFISA.com

The Center for Information Security Awareness – CFISA, was founded to help educate employees on ways to protect themselves against cybercrime. In our training, we always stress that as citizens we need to protect ourselves, our community and the Nation from growing cyber security threats.

We all have a role in protecting our personal data, business data and the critical infrastructure and security awareness training can help to reduce risk. Being aware of new crimes and scams in the news is a fundamental part of the training.

Sharing new scams and crimes you hear about in the news with others, is important to ensure that the people you care about do not fall victim to these types of crimes.